When Eliza was officially potty trained enough that I felt confident getting rid of the changing table, I went in search of an awesome dresser to make over.  Now, I have a serious love affair with yard sales, and I envisioned finding the perfect vintage dresser, something with great lines or fun details that just needed sprucing up.  But I was striking out in a major way, in spite of the insane multitude of yard sales that sunny Saturday morning.

Then I pulled up to a yard sale and saw this:

I thought, 'That has got to be the world's ugliest dresser.'  I had to check it out.  It was a rock solid dresser in very nice condition, but man was it ugly!  No details, no pretty girly lines, just laminate, not anything that I had envisioned.  But the owner did say he'd let me have it for $10.  I told him I'd pass and went along my merry way.  Further searching yielded no results, however, and I could not get the Ugly Dresser off my mind.  It was like a challenge, calling out for me to try to turn it into something beautiful.  Plus I'm really cheap, and the thought of getting such a nice quality (you know, for laminate) piece for so cheap, which I then wouldn't feel too bad if I totally ruined, was just too enticing to resist.

So I brought it home and started mulling over ways to make it awesome.  I had a few different ideas, but nothing really clicked until I thought "STRIPES!"  (It was actually surprising that wasn't my first idea, since I have a major obsession with stripes right now.)  A few coats of paint and some hardware later, here is the new dresser! 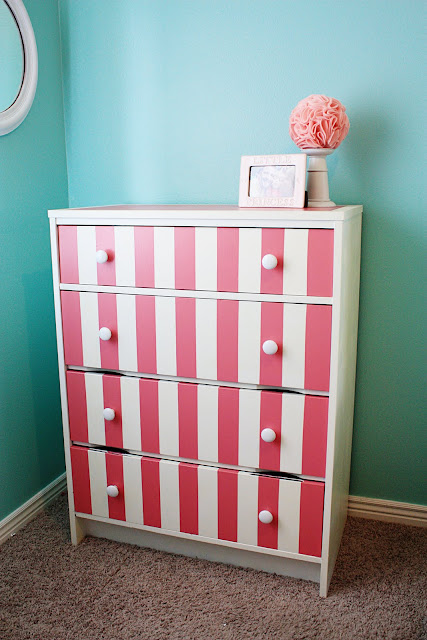 This project took a little time, but was not complicated.  Here is how I did it:

1.  Clean all surfaces really well.  Give them a light sanding (just to rough up the laminate surface a little bit).  Wipe down to remove dust from sanding.

2.  Apply a coat of Zinsser 1-2-3 Bullseye Primer.  *This is the key for painting laminate furniture!*  This primer is made specifically to coat slick surfaces like laminate and give the paint something to hold on to.  It is seriously awesome stuff.  An important thing to remember, though, is to not overload your brush or roller -- the primer is really thick and sticky but dries fast, so if you get globs of it on your piece it will be hard to smooth them out.  Let dry for a minimum of 1 hour.

3.  Paint base color.  Mine is Behr Bleached Linen, because I had nearly an entire can leftover from doing my kitchen. 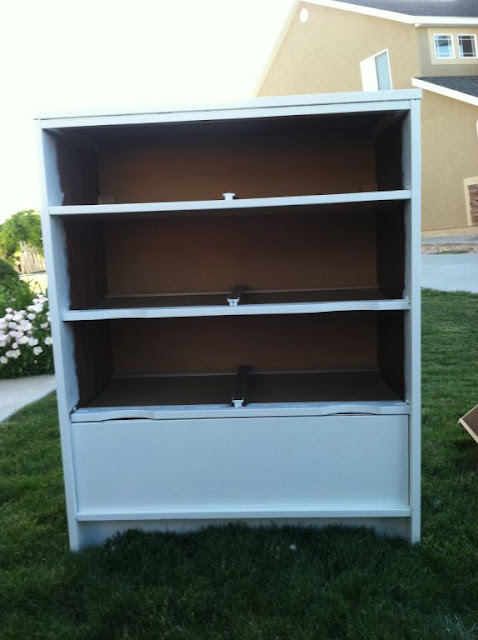 4.  This is the only tricky part.  Decide how many stripes you want, and divide the width of your drawer by that many.  I wanted 13 stripes (7 pink, 6 white).  Try not to bang your head on the driveway in frustration as you try to figure out how to equally divide 31 1/8" by 13.  Well, that's not difficult -- the answer is 2.394230.  But they don't make a mark for that on most rulers.  I probably marked and remarked the stripes on the first drawer 10 times trying to get it worked out.  I finally figured out that if I made the two pink outside stripes 1/8" wider, the rest could all be the same.  Unfortunately, unless you're some kind of crazy math-or-measuring genius, it's probably a matter of trial and error.  Once I finally did figure it out, it was very simple and fast to do the rest of the drawers (it took me the better part of an hour to figure it out, but only about 15 minutes to mark and tape).  I used a pencil to mark where the stripes should be at the top and bottom of each drawer, then rolled painter's tape for each stripe.

5.  Put all drawers back into the dresser to see if they actually line up.  Do a little happy dance when they do. Then be glad it's 6 in the morning and none of your neighbors are out to see you.  Wonder if it's so cute with the green stripes that maybe you should just leave it that way... 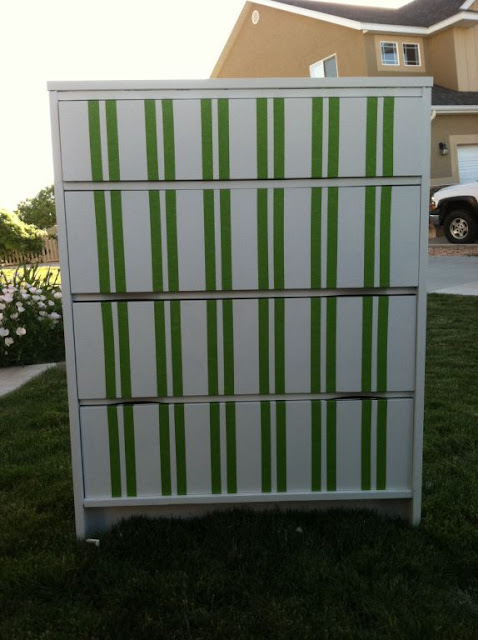 Just a note -- when I went to paint the stripes, I ended up putting another piece of tape in between each set so that the white stripes were completely covered.  It saved my sanity because I didn't have to worry about pink paint getting onto the white stripes.

6.  Using your base coat paint, paint over the edges of the tape.  This will seal the edges of your tape, making sure that you won't get any bleed when you do your stripe color. 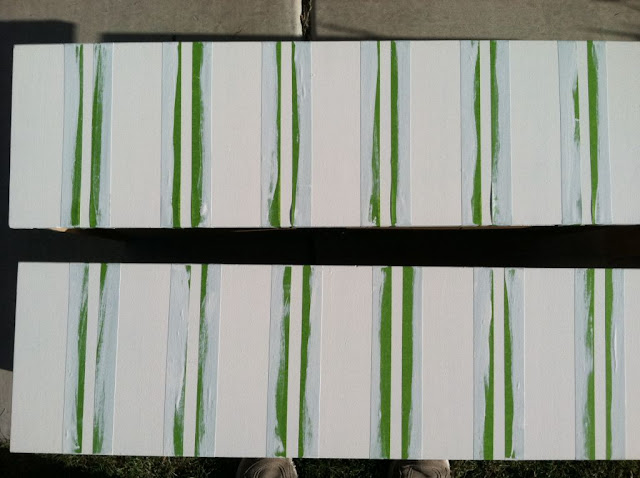 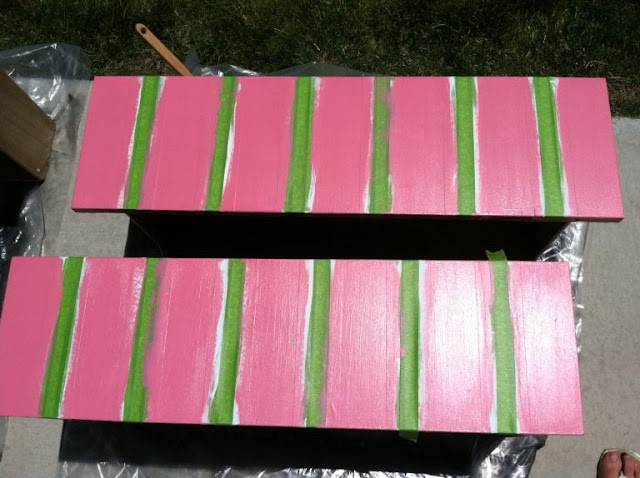 8.  Remove tape.  Do a HUGE happy dance (complete with fist pump and "Whoohoo!") when you see how awesome your stripes look.  Then realize that it is now the afternoon and several neighbors are out in their yards, but hey -- they already knew you were weird. 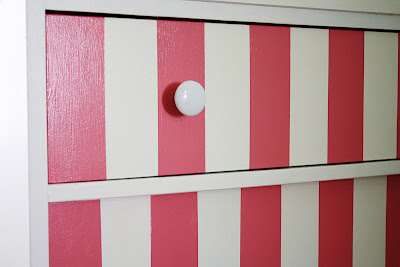 9.  Add hardware.  I forgot to take a picture of this step, but it was very simple.  I made myself a cardstock template the exact size of the pink stripe, then found the center of it by folding it in half both ways (super scientific, I know).  I laid that template on the pink stripe, then drilled a hole through the center.  Repeat for all drawers, then screw in hardware.  Easy peasy.

Voila!  The World's Ugliest Dresser turned super fabulous on the cheap.  My cost for this was:
Dresser: $10
Paint and brush: $10 (Thanks to a Groupon for Kwal paint), with TONS of paint leftover for other projects.
Hardware: $12 (I got these at Hobby Lobby -- they have knobs 50% off very frequently)

So don't pass up a good deal just because it looks ugly -- a little creativity and elbow grease can transform anything!

To see the rest of the room, check out this post.

I'll be linking up to these great parties!

Posted by tomiannie at 2:37 PM

Incredible and oh so inspiring! What a wonderful job you did

You. Are. Amazing. I can never say it enough! I would have passed by that yard sale dresser for sure -- pretty ugly!! But you made it beautiful. Eliza is so lucky to have such a creative momma...and a new beautiful "big girl" room!!!! Way to go.

Thanks so much for linking up!! I featured your post in my wrap up! http://tidymom.net/2011/im-lovin-it-wrap-up-great-ideas-6/

Have a great weekend!

OMG my jaw is hanging open! I will NEVER pass by an ugly dresser at the Goodwill store again! Who needs to buy new stuff when you can make something old or ugly look THIS GOOD? It's seriously absolutely gorgeous!

Adorabble. I don't think I would have even given it a second look. That's what I LOVE about blogging. It inspires me to want to go find some old ugly things and make them amazing too! Thanks for sharing!

This is the most DARLING dresser i have EVER seen! What great work Tomi!

Oh how I love this little cutie in all her pinkatasticness! (Oh I think I just created a new word!) :) Great job!

what is the paint color for the pink stripes