Well, I've been just busting to tell you all my exciting news, and I finally can! I've been chosen for the design team over at ScrapbookPal.com, which is a really excellent resource for so many crafty goodies. I can't wait to get going and be able to share lots of fun projects with you using their awesome products!
Posted by tomiannie at 10:45 AM 7 comments: 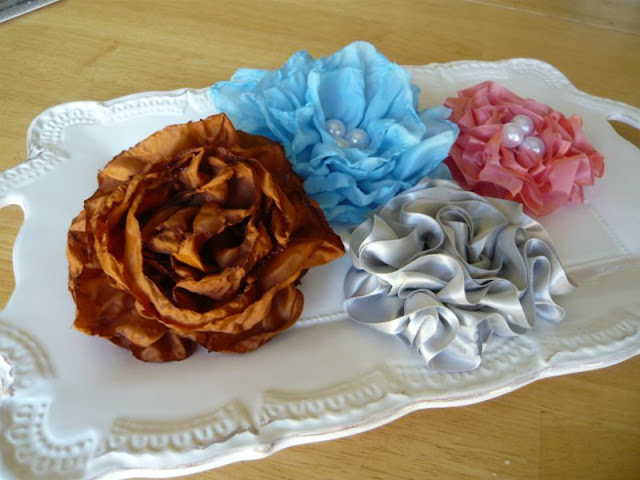 My new obsession is making flowers with ribbon and fabric (as I'm sure my hubby can attest as he wades through mountains of material, beads, and glue sticks...).  I've been so inspired by all the great tutorials I've seen online, and now I've come up with one of my own that I'd like to share with you!  I think this method is great because it is easy to do and you can come up with all kinds of looks depending on the material you use.  For this one I used some super light-weight material that I found at DI (our local thrift store) -- a huge amount of this and the blue stuffed into a ziploc bag for $1.  Can't beat that! 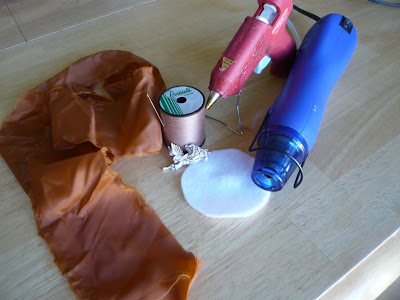 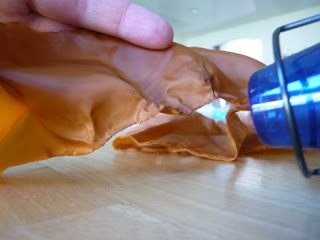 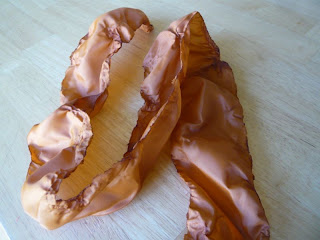 Step 2
Sew a straight basting stitch down the center of your fabric and gather as you go along. 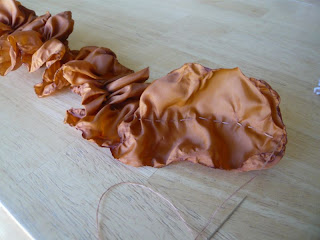 Step 3
Fold the fabric in half so that the stitch is now the bottom (kind of in a V-shape – only the part you’re holding will stay folded, so don’t worry about the rest right now).  Stitch that to the center of your felt circle. 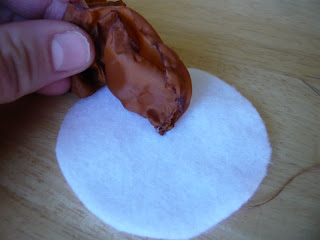 Step 4
Put a bead of hot glue around the center of your flower, where you’ve tacked down the beginning of your fabric.  Folding the fabric in half as you go (so you get that V shape), press the stitched line into the hot glue.  Continue to spiral around the center in 1-2” increments until you’ve glued down your whole length. 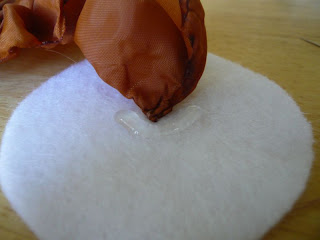 Step 5
Finish however you like – I like to add both a pin back and an alligator clip back so I can use it however I feel like, but you could also add it directly to a pillow, a headband, or whatever you’re accessorizing! 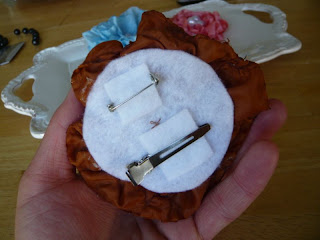 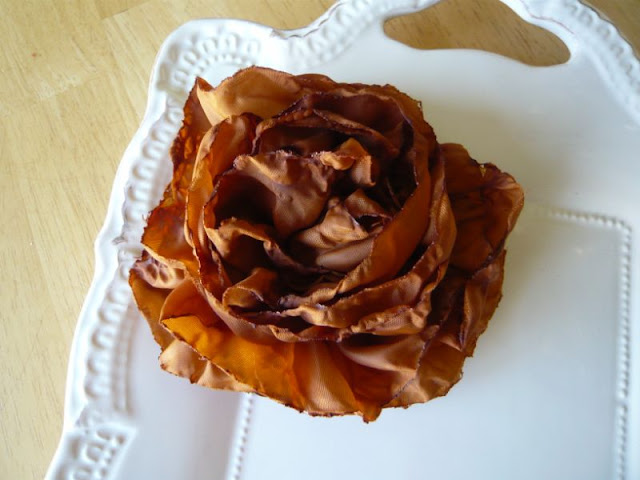 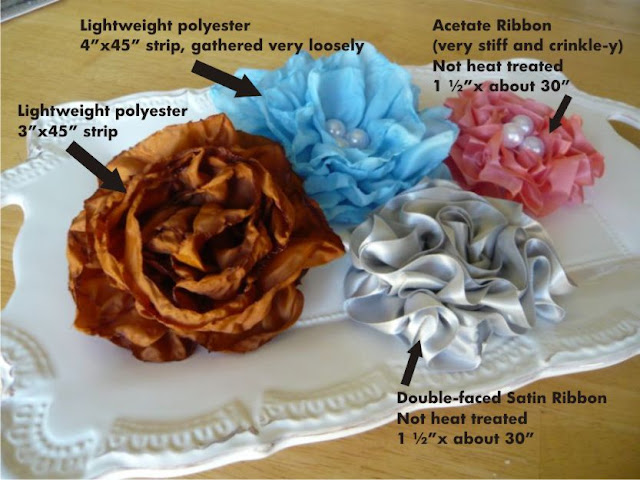 As you may have noticed, I changed the title of my blog!  It used to be "I Love Pretty Paper," and while that is still most assuredly true, I decided that it just didn't tell the whole story anymore.  I have been discovering and loving a whole lot of other kinds of projects, too, and I'm excited to share all kinds of new things with you.  Also, now I have three kids and a lot more other "stuff" on my plate, my crafting time seems to get smaller and smaller.  I know you all feel the same squeeze that I do, too!  So this new title seemed especially appropriate -- aren't we all trying to just squeeze in as much as we can? 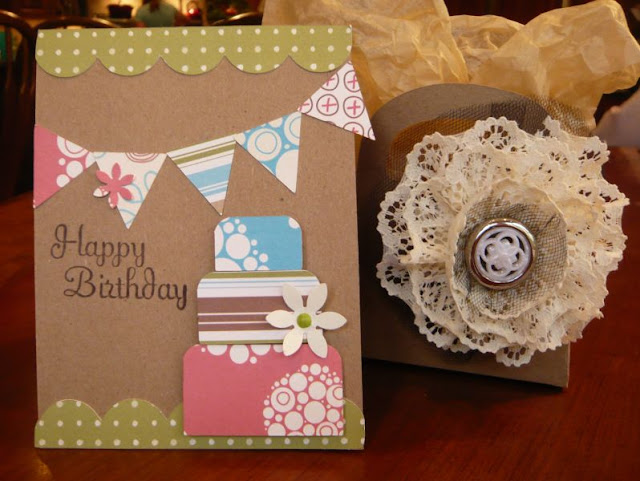 This project highlights things that I really love:  pretty paper (of course!), a fabulous flower accessory, and getting a lot of bang for your buck in the shortest amount of time possible!  This is a gift I made for my sister's birthday.  I LOVE how this card turned out -- it's the perfect design for using up scraps of coordinating papers, and it was so quick to put together.  I designed it on my Cricut Gypsy, and because the pieces are so small, I designed it to cut out enough for four cards.  It took almost no time to put the four cards together, and now I have extras in my stash.  Yay!

I made the lace flower accessory based on the tutorial HERE at Aly&Ash, found via UCreate.  Have you checked out UCreate?  It is a fantastic site for crafters -- she sifts through all the fun projects and tutorials in blogland and shows off the cutest stuff.  Following a blog like this one is a great way to make the most of the time you have!  I added some tulle to the bottom and top layers of my flower, just to boost the glam appeal for my super-fabulous sister.  I added an alligator clip and a pin-back, so that she can wear it any which way. I love it!

I hope you are all having a terrific day, and that you find some time to squeeze in a little creativity yourself!
Posted by tomiannie at 1:57 PM 2 comments:

Hello, readers!  I'm working on some fun changes on my blog, so stay tuned!  I'll soon have a new look and a fun new tutorial to share.  Hope you're having a great day!
Posted by tomiannie at 8:17 AM 1 comment:

Cinema Saturday Guest Designer -- Much Ado About Nothing

I was honored last week to find out that I had won the "Audrey" award over at Cinema Saturday for my Up card, and part of that was the opportunity to be a guest designer this week!  The movie this week is "Much Ado About Nothing" -- the movie version of the Shakespeare play with Emma Thompson and Kenneth Branaugh. 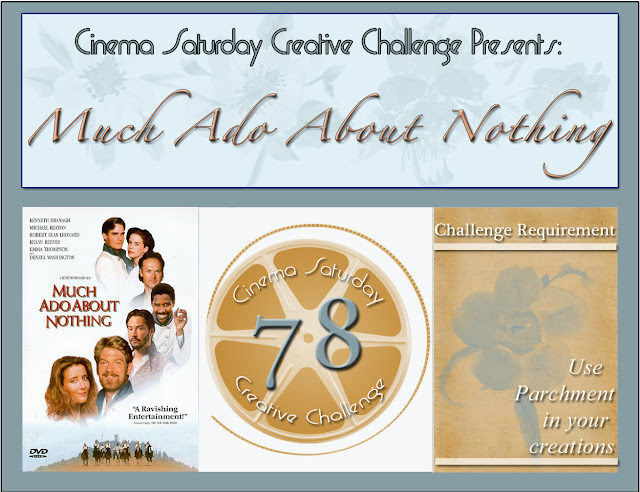 I hadn't seen it in years, so I found it on YouTube and had a fantastically nostalgic time watching  it.  It reminds me so much of my high school years, when I was a member of the Shakespeare team and did more than one scene from that very play.  Ah, good times.  I had forgotten how downright funny that movie is -- even if you don't think you're a Shakespeare fan, it's presented so well you'll forget to hate it. :)

Now, on to the cards.  Our assignment was to use parchment in some way, and I have to admit that it was a huge challenge for me!  The word parchment just brought to mind the old-school mottled paper that I used to print resumes on when I worked at OfficeMax in college -- so not my style now!  I thought about the challenge all week but just couldn't get any mojo going.  Then last night inspiration struck at last, and I ended up with not one but TWO cards that I really love!  They are both wedding cards, because what better theme for Much Ado About Nothing?!

For this first card, what inspired me while thinking about "parchment" was the rich texture of that paper.  I was also inspired by the costumes in the movie -- nearly everyone in the movie is dressed in some shade of white or ivory throughout.  I sprayed the base of the card with "Old Lace" Glimmer Mist, then layered on the pretty scroll-y layer cut from the same cardstock.  I love the white-on-white look, and that the glimmer mist gives it just enough sparkle to deepen that texture. 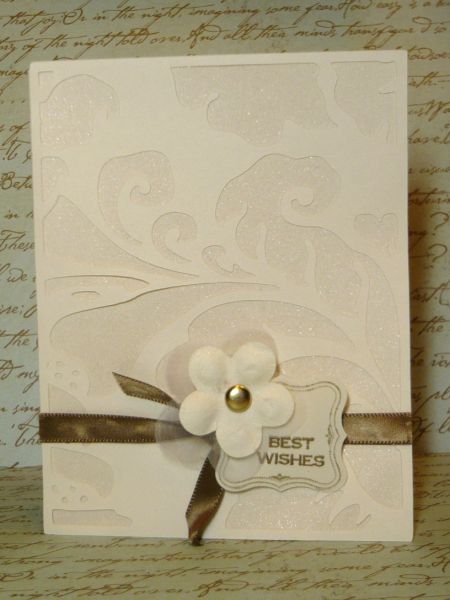 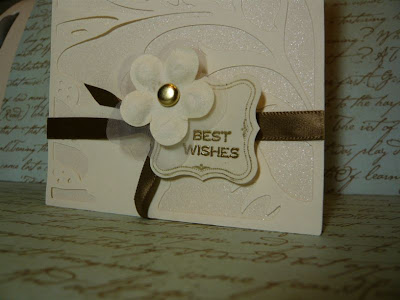 The second card was really inspired by the paper.  I thought the scripty writing on the ivory background was just perfect for the "parchment" theme, and the fact that the words are actually taken from A Midsummer Night's Dream (another Shakespeare play) was a great bonus. 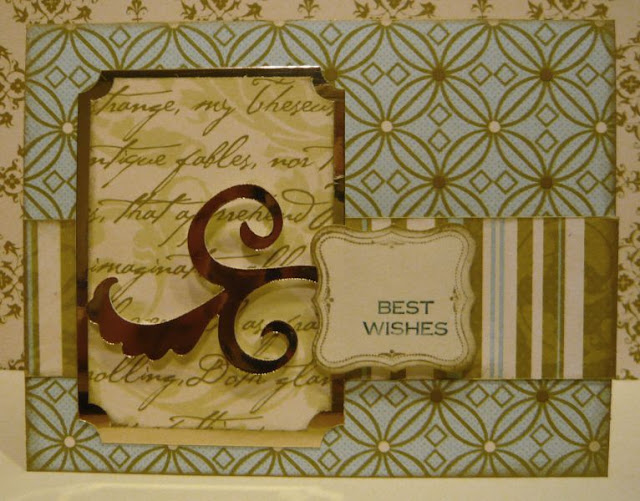 I hope you'll all check out Cinema Saturday -- it's such a fun challenge blog, and Brooke and Sankari (the ladies who run it) are incredibly talented artists.  I can't wait to see what movie they pick next!
Posted by tomiannie at 8:30 AM 2 comments: 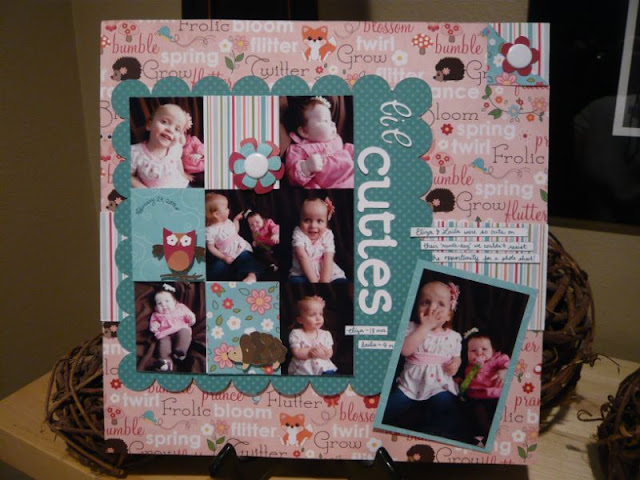 Hey, y'all!  I'm posting this last minute because I just found out about a design team call for a really great online shop -- Scrapbookpal.com.  My friend Amy has always raved about them, and they really do have all sorts of great products, great deals, and great customer service.  They are a great resource for Cricut products, so I thought I'd post this layout because it uses my favorite new cartridge -- Give a Hoot!  I love the cute little critters on this cartridge.  I actually bought this paper specifically because I thought it worked so well with this cartridge. 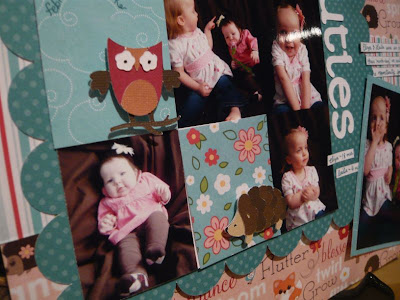