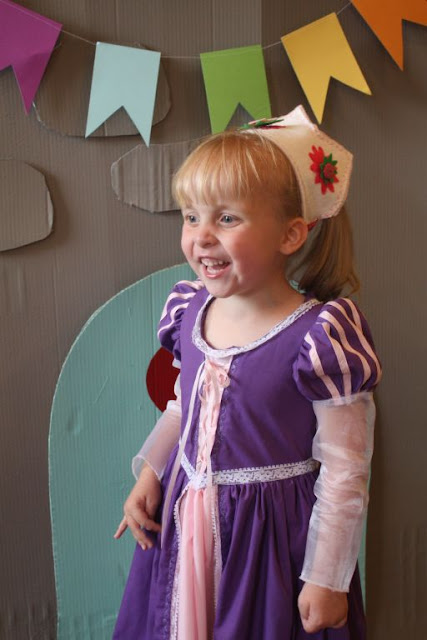 Actually, this post should properly be titled "Eliza's Pink and Purple Rainbow Princess and Puppy Birthday Party!"  My little Eliza turned four a bit ago, and this was the first birthday that she's been really excited about.  For months she asked "Is it my birthday yet?!"  She is such a funny girl, so full of fun and imagination, and we wanted to make this birthday extra special.  We waffled a little bit about themes -- she really loves dogs, and she loves princesses -- and then we found Princess Amerah, a perfectly delightful princess who brings her sweet little dog to the party!  Sold!  Eliza's favorite color is purple, but she couldn't settle on just that -- she had to have the whole rainbow.  And thus the theme was born! 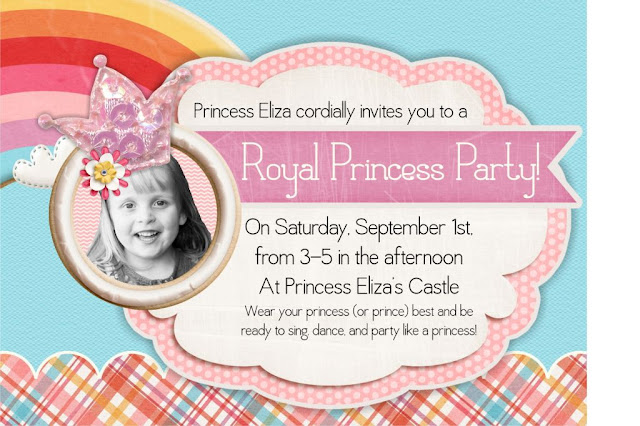 I began with these invitations, which I made with the Sew Sweet and Cute kit from Sweet Shoppe Designs (this website has the most amazing digi-kits, seriously).  Eliza delivered them in her best princess dress. 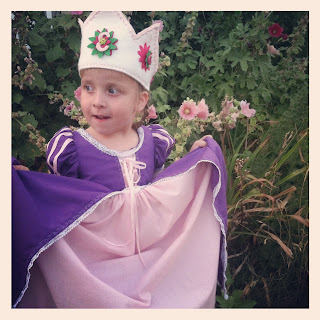 When the big day of the party arrived, we started with a veritable puppy parade.  This was my husband's brilliant idea -- we asked several of our friends who have dogs to come by throughout the day, and bring their dogs to say happy birthday to Eliza.  When the first dog came to the door, and Eliza found out the dog was there to see her, she was ecstatic. 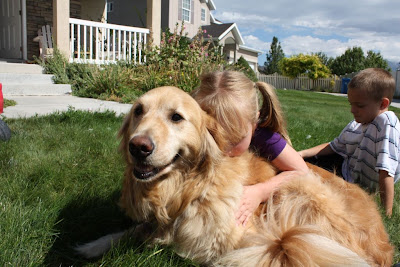 After the second dog came and was also for her, she just camped out by the front door, hoping another would come.

And then it was finally party time!  (This is the part that, truth be told, was just as much or more fun for me as it was for Eliza.)  Oh, the rainbow deliciousness! 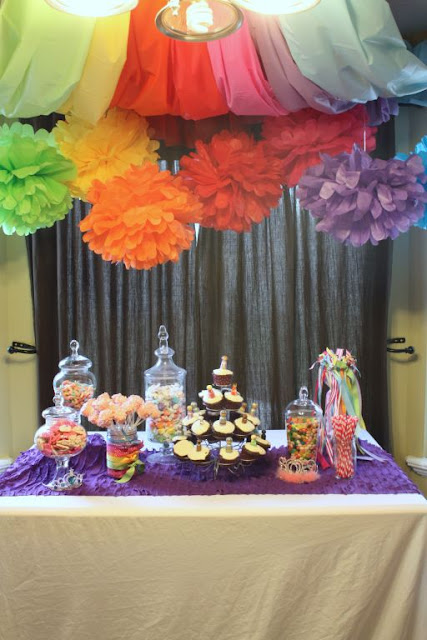 The rainbow on the ceiling was made from $1 tablecloths from Walmart, cut in half.  The poof balls are made from tissue paper.  I hit our local Winco's bulk candy section for all the rainbow goodies I could find, and filled my collection of apothecary jars with them.  I put my boys in charge of sorting out the taffies into rainbow order, too. 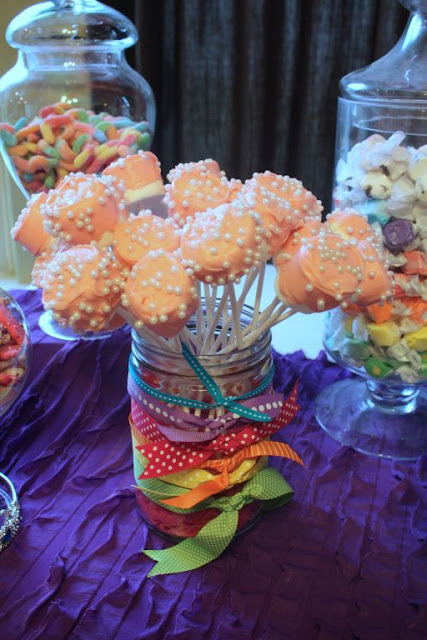 I thought candy magic wands would be so much fun -- I put marshmallows on candy sticks, then dipped them in pink candy melts and sprinkled candy pearls  on them.  The kids thought they were brilliant, and they even tasted good! 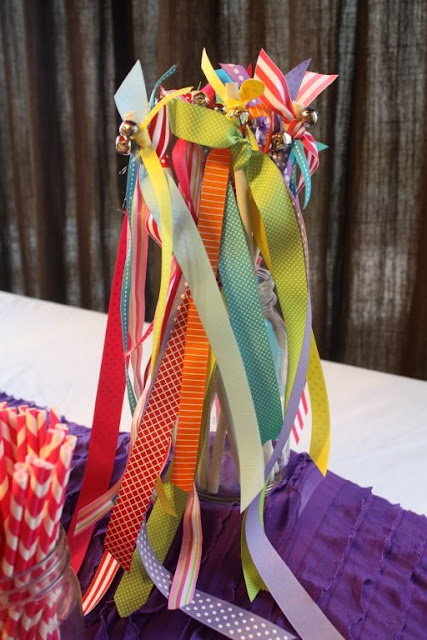 And then of course the princesses needed real dancing wands as well, so I cut some 12" dowels and tied a few rainbow ribbons to each, then hot-glued on some little jingle bells.  These were a huge hit!

And then, one of my favorite parts -- the peg doll cupcake tower! 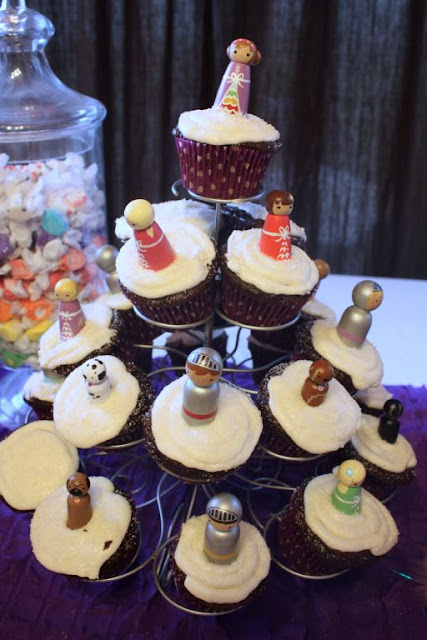 Eliza was dead set on chocolate cupcakes, which we made together and put in purple polka dot cupcake wrappers.  I painted a princess to match each of the little girls and knights for the boys (which they then got to take home as a favor), and then a selection of puppies just for Eliza for fun.  The purple princess in front is Eliza, of course! 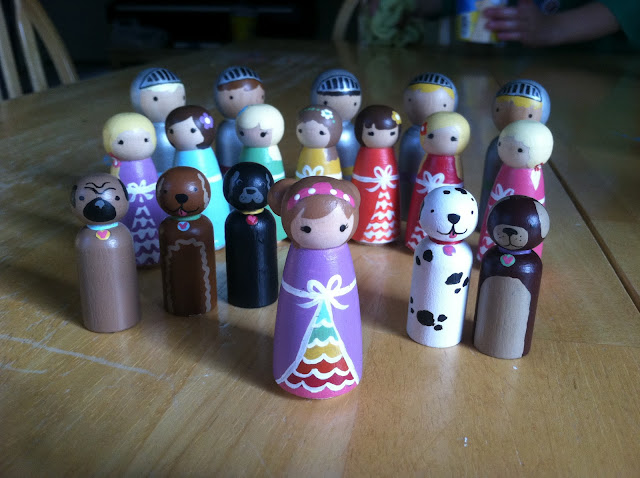 This next part was quite possibly my favorite.  I thought it would be kind of anti-climactic if we spent all this money hiring a lovely princess and had all these adorable girls dressed up as princesses, and then had the backdrop of all the pictures be our lame bookshelves and big ugly tv.  So my awesome long-suffering husband built me this fabulous cardboard castle backdrop.  My friend's mom donated the cardboard, and I painted it with leftover paints from various rooms in our house, so this part was freeeeeee.  Yay!  My favorite part is the rainbow banner -- I just raided my cardstock stash, found some happy colors, cut it into rectangles, then snipped out a V in each to make the pennant shape.  I sewed them end to end for a quick but super awesome banner. 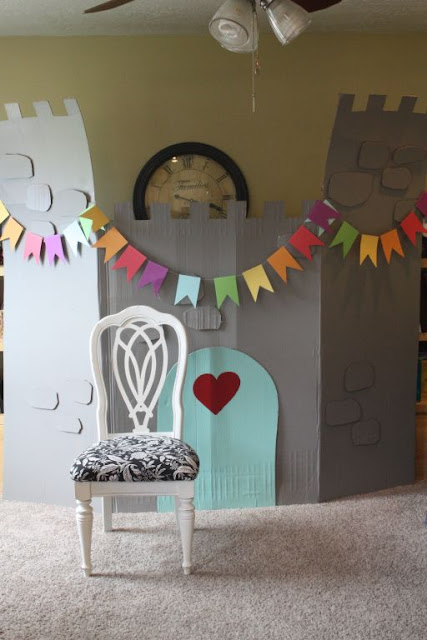 We took pictures of all the little princesses in front of the castle.  I loved the frame idea, but only a couple of the little girls were interested.  But they ALL loved having their picture taken by the castle.  :) 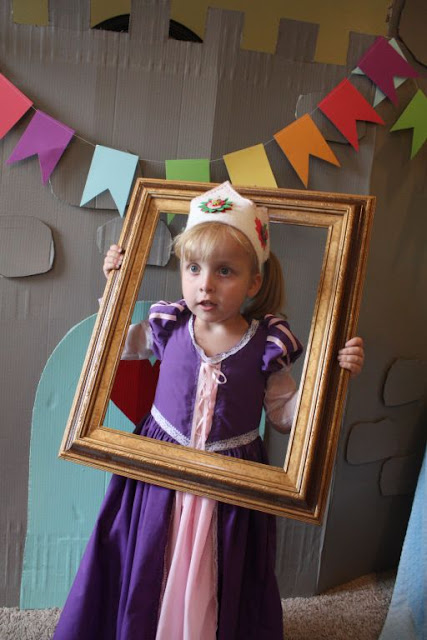 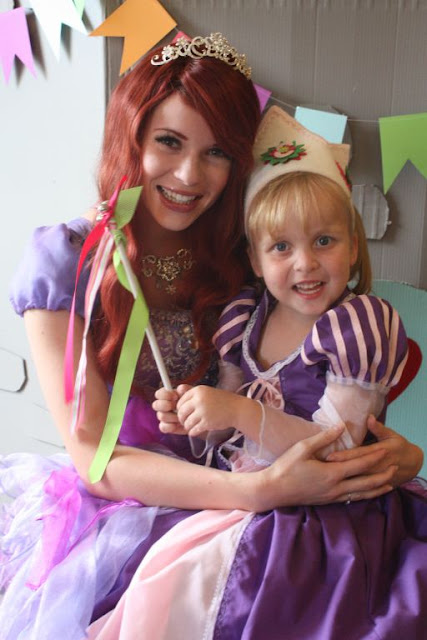 The little girls were enchanted by her story. 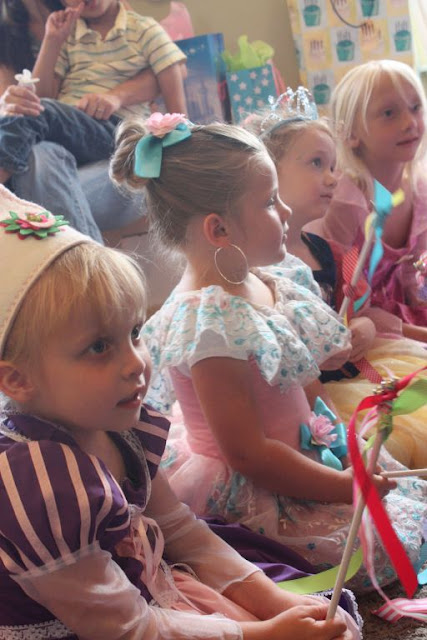 But without a doubt, Eliza's favorite part was getting to meet Princess Amerah's sweet little dog Sadie and Sadie's new puppy Teeny.  They were the sweetest dogs I've ever seen.  Eliza was squealing with delight as Sadie licked her face all over. 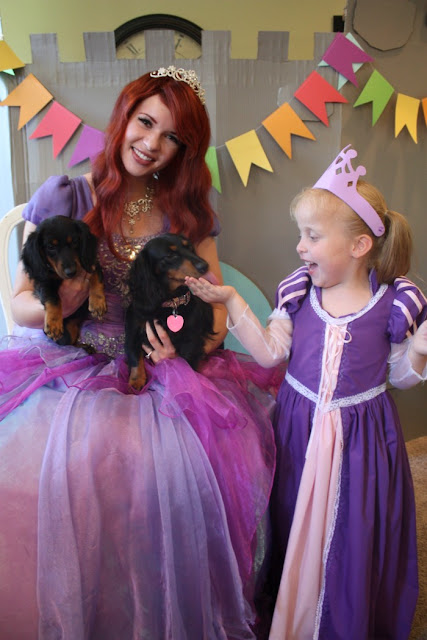