We just got finished with a birthday party for my two boys, and it was so fun I had to share right away.  My boys' birthdays are both in December, just 9 days apart.* Sam and Josh (along with the rest of the family) are huge Phineas and Ferb fans, so it didn't take much prompting on my part for them to love the idea of a P&F-themed party.  (Yes, I did prompt them.  I love Phineas and Ferb and I'm not ashamed to admit it.)

We started out with this invitation, which I designed on the computer using Phineas and Ferb clipart I found on Disney's Family website.  We left the name blank so we could just get a bunch printed as 4x6s at Walmart, then the boys wrote their friends' names on each one before delivering them. 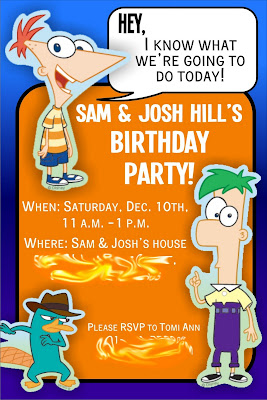 I had three big ideas for this party, which came out with...hmmm...varying degrees of success. :) 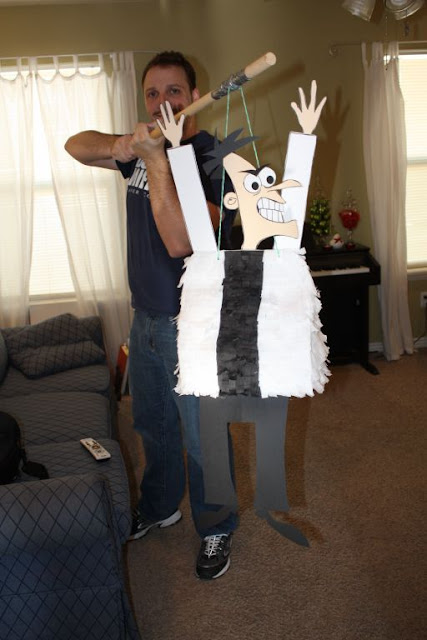 1.  Dr. Doofenshmirtz pinata.  Dr. D. is the bumbling bad guy of the show (for you unlucky few who aren't familiar with the P&F world), whose evil schemes inevitably backfire.  Who better to be the pinata?  We even labeled the stick "The Whackinator."

As I searched Pinterest for DIY pinata ideas, this paper bag pinata tutorial stood out -- didn't seem like it could be much cheaper or easier than making a pinata out of a paper grocery bag!  The best tip on that tutorial was to cut the crepe paper while it's on the roll so you can just glue it on already fringed and awesome.  If anyone would like a step-by-step tutorial for this from me, I did take pictures so I can post one if you want it.  Basically you just fill the bag with candy, fold the top down and seal really well with tape, then hot glue miles of fringed crepe paper to the back.  On this one I started with the black in the center, then added the white for the lab coat.

Once I had the body done, I pieced the head, arms, and legs together from cardstock.  I may or may not have broken out the "Learn to Draw Phineas and Ferb" book I had gotten for Sam for his birthday a little early so that I could figure it out.  Very helpful!  The head and arms were hot glued on and held in place with bamboo skewers in the back.  For about 3 seconds I wondered if I should cover the skewers somehow, and then my sane person voice turned on and reminded me that a herd of children were just going to whack the thing to death in about 5 minutes anyway... 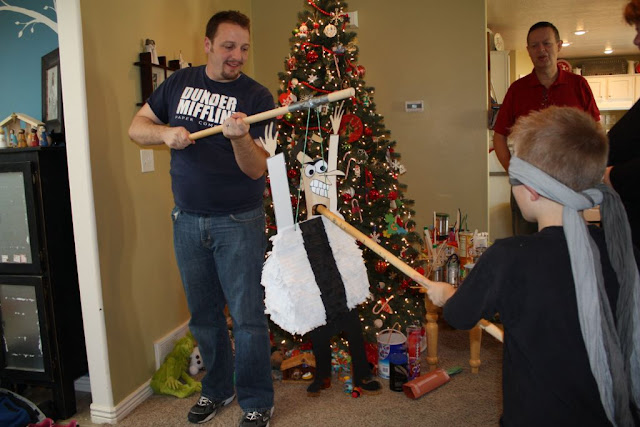 We got through almost all the kids twice before we ripped a big enough hole for the candy to start coming out.  That grocery bag was a lot tougher than I thought!  I had also reinforced the corners and bottom of the bag with packing tape (just a little) so it wouldn't break too early, but I definitely won't do that in the future. 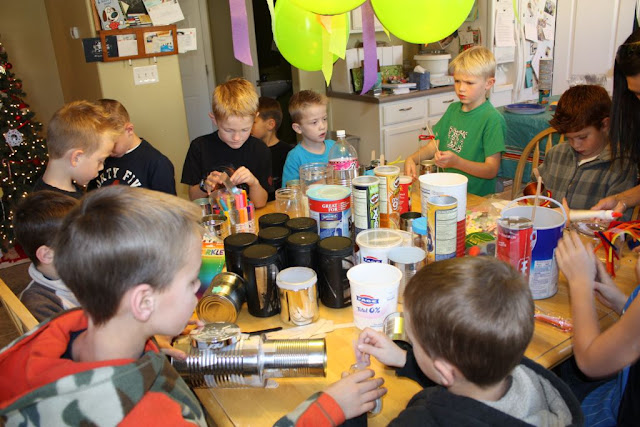 2.  Invention activity.  This was hands-down the best part of the party.  When we first started planning, we talked about how P&F invent and build amazing things every day, so we decided that's what we should do, too.  We saved up all our cans and jars and cartons and lids over the past few months, then spread them out on the kitchen table with craft sticks, pipe cleaners, glitter glue, googly eyes, and other random crafty bits -- along with a LOT of glue and tape -- and told the kids to go wild and invent or build anything they wanted.  I wasn't sure how much they'd be into it, but it was a huge hit!  The kids were super creative -- we had robots and rockets and elevators and a cannon thing and tons of other stuff.  So fun. 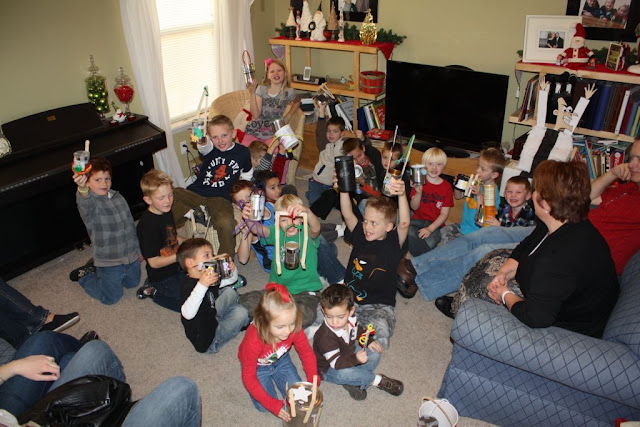 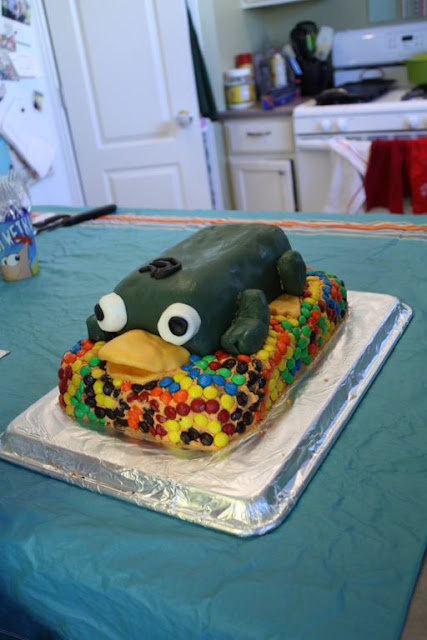 3.  Perry the Platypus cake.  This was the toughie for me.  I have always wanted to decorate a cake with fondant, so when my lovely friend Janelle pointed me to this really awesome tutorial from Dabbled for creating a Perry the Platypus-shaped cake, I was so there.  But, as I posted on FB Friday night:


Today I learned two things:
1 -- Objects on the Internet may be more difficult than they appear.2 -- Cake decorating will not be my avenue to fame and fortune.
This took a long time and my marshmallow fondant was SO not the right texture or consistency, and heaven knows it's not the right color.  I was about ready to throw in the towel, but once he was all done, all three of my kids were so excited and loved it so much that none of that even mattered.  And that's why kids are awesome. Also my hubby was very supportive through the whole thing, even when I was nigh unto tears after kneading that stupid fondant for an hour... :)  The boys helped me decorate the base cake with M&Ms and we had so much fun doing it together. 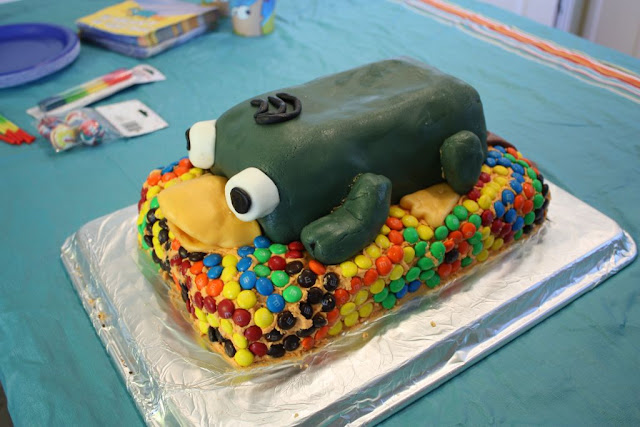 So, to sum up, the tutorial is really awesome and you should definitely check it out if you're interested in making a Perry cake.  Hers actually looks like Perry instead of Perry's fugly forest green cousin...  I will probably try fondant again some day, too.  Can't let the fondant win! :oD 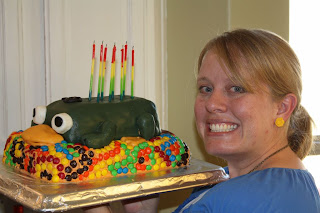 Thanks for stopping by!


*For anyone contemplating getting pregnant, I really recommend not having babies in December.  It's stinks when they're brand new and it's cold/flu/RSV season, and it's kind of a bummer your whole life.  I know this not only because both my boys are in December, but also my mom, two of my sisters, and my brother.  One of my sisters is even ON Christmas.  Everybody forgets your birthday because of Christmas busy-ness, you can't party outside, and there are always Christmas decorations in the background of your birthday pics...
Posted by tomiannie at 10:00 AM 8 comments:

Ever since I painted my first peg doll family I have been pretty much in love with these cute little wooden people.  I've painted several more and even taught a little class on how to do it!  A couple of months ago I saw this peg doll nativity on Pinterest, and I was so inspired I knew I had to make my own!  This nativity might just be my favorite peg doll project of all.

I decided that I'd have each figure carrying something symbolic.  Mary has a heart because she gave the gift of God's love to the world.  Joseph has a lantern because he was the protector and guide for baby Jesus.


The angel has the star, of course.  I added the other colors to give her a more folk art feel to coordinate with the wise men.
Here we have the shepherd with his crook and a little drummer boy.  And I just love these little sheepies. 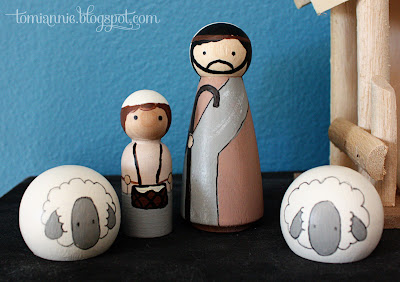 Probably my favorite part, though, is the three wise men and their camels!  When I was at Hobby Lobby looking for the flat-bottomed knobs for the sheep and donkey, I found these flat-bottomed egg shapes (which I think are for some kind of Japanese wooden doll) and I immediately thought my wise men were going to have to have camels.  I definitely spent the longest of all trying to figure out how to do their robes and treasures and those darn camel faces. 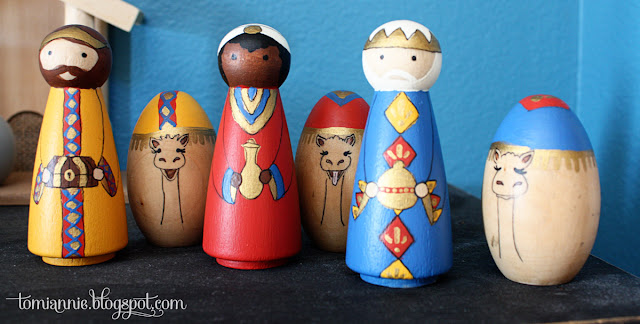 A project like this might seem a little intimidating, but these little dolls are so fun, and you can really make them as simple or as detailed as you like.  I started by doodling how I wanted each doll to look in my ever-present doodling notebook.  I googled things like "nativity" and "three wise men" and "camel face" to get some inspiration for the colors and designs of the different dolls and took inspiration from many different nativity sets and paintings.  It was so much fun that I am hoping to list some in my etsy shop next Christmas!