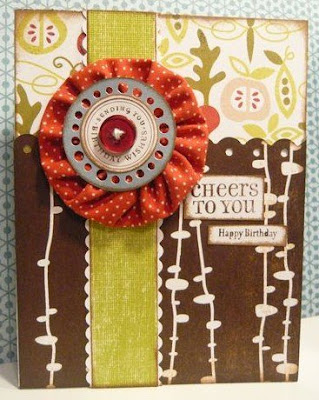 Regina at BBTB challenged us to use this funky dot-bordered circle from Mini-Monograms this week, and my first thought was that it would make a great flower center for a cute fabric yo-yo flower. I'm officially obsessed with making these. They are so easy -- I got instructions from Heather Bailey's awesome blog. The sketch is the current challenge from PageMaps -- if you haven't checked out this awesome site, it is a total must-visit for scrappers and card makers.

Make sure you visit BBTB this week, because SweetArts Paperie is sponsoring a card contest with a fabulous prize kit. Can't wait to see what you create! 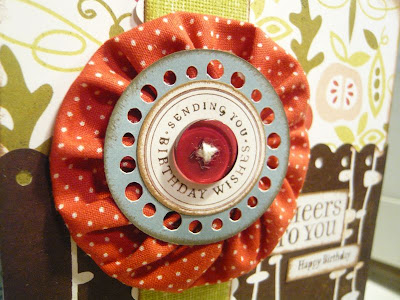 I can't post my current projects yet because they're Christmas presents, and I don't want anyone peeking! :) But I wanted to share some things I've been thinking about this Christmas, so here's a post from my family blog.


The Secret to World Peace...

Let me explain. Every other Christmas, our family does a service Christmas. This year we learned about families from Bhutan who have recently arrived in Utah as refugees -- before this they were refugees in Nepal for 17 years, living in bamboo and plastic huts on 150 grams of rice per day and occasionally a few vegetables. They came here with nothing. This last Friday we took three little families out to dinner and then to Wal-Mart to help with necessities. Their clothes were ragged and ill-fitting, and most of them had only sandals. One young mom was wearing a pair of flip-flops, carrying her daughter who had no shoes at all.

Another little family had two boys who were 5 and 3, just like Sammy and Josh. When we got to dinner, Sammy eyed the boy his age nervously. He wanted to make friends but was feeling very shy, especially because the other boy didn't speak very much English. I could see that the other boy was curious about Sammy, too, but was probably even more scared than Sammy. Throughout dinner he waffled back and forth about whether to go meet the other boy. Then Amy found out that what the other boy wanted more than anything else was snow boats. This was something Sammy could understand. Just that morning I had dug out the snowboots for the boys (thank goodness last year's boots still fit Sammy and Sammy's boots from two years ago fit Josh now), and they were so very excited to wear them out in the snow. Soon Sammy was running over to the other boy, showing him how his boots lit up when he stomped his foot and promising to help him find light up boots, too. He found out the other boy's name was Tila, and they were suddenly best buddies. Josh quickly followed his lead and made friend's with Tila's little brother with a hearty "Let's hold hands!"

When we got to Walmart, the boys wanted to get right back to the shoe department to search for light up boots. To all of our disappointment, Walmart didn't have any light up boots this year. As I helped Tila try on the different styles of boots, he kept asking "No lights?" We did find him some nice warm boots that had cool reflectors, but he was obviously disappointed about the no lights situation. Sammy reassured him that it was okay, because they both still had really cool boots, and they got back to happily chasing each other around the shoe department. When we had to go home, Sammy was sad to leave his new friend and would only do it because I promised we'd get to see Tila and his family again.

Which brings me to why snowboots are the secret to world peace. Sammy and Tila were a little shy and afraid to meet one another until they discovered one really cool thing that they had in common. Once they took that first step, they found that they also both liked to run around and be crazy and laugh. It didn't matter so much that they didn't have a common language or that they'd never met. Joshy and Tila's little brother didn't even need that -- they just needed someone to point them both in each other's direction. So many of the world's problems are caused by an "us vs. them" mentality -- we look at people who are different from us, no matter what the difference is -- and sometimes we're a little scared to go out on a limb. We don't know how they'll receive our efforts. We don't know them or their motivations. It might be someone from across the world or across the street. But when we find something that unites us, it opens up a whole world of possibility. We are all truly our Heavenly Father's children and He loves each of us. Those of us who have been blessed with so much can do more than we even know to bless the lives of our brothers and sisters, if we're willing to open our hearts to them, if we give them the benefit of the doubt and realize that they are more like us than we realize.

Today as the snow swirls around our comfy, cozy house, I am so grateful for the incredible blessings we've been given. And I'm thankful to know that Tila and his little brother and his mom and dad have warm boots and coats today. But there are still so many that lack even these basic necessities. Please don't forget them. My sister Amy has just started a charity called "Neighbors Against Hunger" to help the many Bhutanese families who have just come into our community, and others like them. If you'd like more information about how you can help, please check out the information on the Neighbors Against Hunger Facebook group. Every little bit helps!
Posted by tomiannie at 12:54 PM 2 comments:

It's been quite a while since I got some 12x12 pages done -- I've been mostly doing cards and mini-albums lately. But I just had to scrap these adorable pics of Eliza with her first pigtails! Isn't she just the cutest thing? It is so stinkin' fun to finally have a girl to play with and to scrap for!

This layout is yet another tribute to stash scrapping. I've had all these supplies for months or even years! I couldn't find background paper in my stash that worked for the feel I wanted, so I found a round foam stamp and painted the polka dots on myself. It turned out just as cute as I'd hoped! I drew the wonky scalloped square myself as well on an ooooooooolllllddddd piece of patterned paper I thought I'd probably never use. But it was perfect for this page! I painted the chipboard shapes and sprinkled them with transparent glitter. TFL 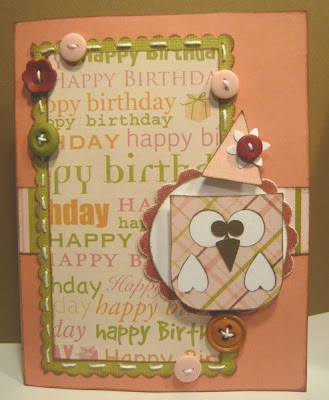 It's been weeks since I had a chance to play along with 2 Sketches 4 You, but this sketch was so perfect I just couldn't miss another week. I designed this cute little owl and turned her into a cut file for my Cricut using SCAL -- LOVE IT! I think on the inside it will say "Whooo's the birthday girl?" or some other cute owl-y saying. 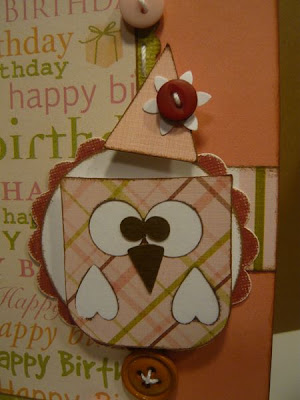 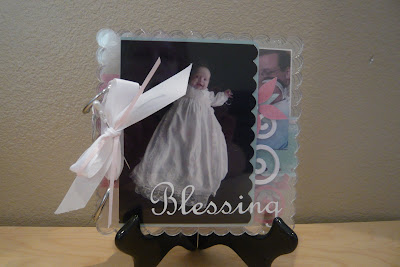 Wow, I can't believe it's been a whole month since I had a chance to post! It's been crazy around here -- two siblings got married, Thanksgiving, a craft fair, plus every day life!

My favorite current project is this acrylic album -- I've been wanting to try one of these forever, and I just love how it turned out. It was a fun challenge, having to think about how each page would look layered with the others instead of just taking one page at a time. This album is about Eliza's baby blessing and the beautiful dress that my dh's mom and grandma made for her. In our faith we don't believe in infant baptism, but we do gather together as a family for the father to give the baby a special blessing. Dan's mom and grandma put so much work and love into this dress, I wanted something special to honor that. The album itself is from Scrapworks, I believe, and the paper is from Fancy Pants. I used a Sizzix flourish die, and the flowers are my own design, cut with my Cricut machine and SCAL. I also added some rhinestones and ribbon. So sweet! TFL!