Taking a break from my massive closet cleanout to share a couple of cards with you!  I'm sorry to say that I have had several reasons to make "Thinking of You" cards in the last month or so.  A card just seems so inadequate sometimes, but if a person you care about has lost someone and is too far away for a real hug, then I guess it has to do.  At least I can put all my best love and effort into the card, and hope that it somehow translates when the person opens it. 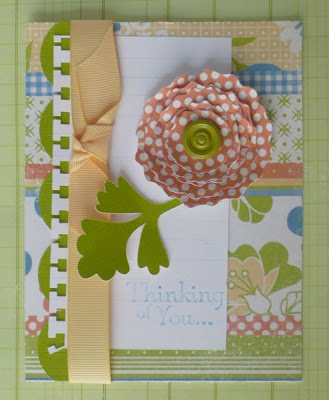 This one using paper from Making Memories, ribbon from SU, an EK Success border punch for that notebook edge, a Chatterbox brad, and a SU stamp.  The flower is one I designed for SCAL and cut with  my Cricut (the file is available in my etsy shop). 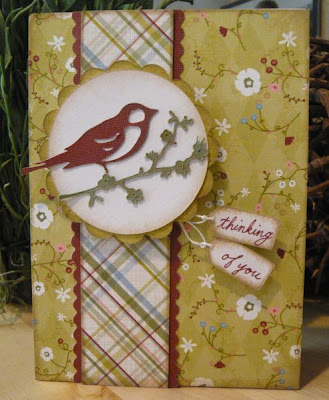 This one uses Chatterbox papers.  The bird and branch come from the Home Decor cartridge, the scallop circle comes from Mini Monograms, and the tags come from George.
Posted by tomiannie at 1:47 PM 8 comments:

Labels: thinking of you

Oh, golly -- you know those crafting moments where you go "A-HA!" and you jump up and down with glee?  (Okay, some of you might be too cool to actually jump up and down and clap your hands, but I bet you're doing it on the inside...)  Well, I had one of the moments on Saturday night.

My dh's cousin sent me a message asking about the Cricut and whether it could cut felt.  My first thought was no, how could it possibly?  But I'd never actually tried it, so I decided to give it a go.  I got out my Heat-n-Bond UltraHold (the must-have if you're going to cut fabric with the bug) and ironed it onto two different kinds of felt -- one the cheap polyester kind you get on the bolt at Joann's, and the other some nice wool felt I bought at a quilt shop.  Wool felt is much sturdier and just all around nicer than the polyester stuff.

I tried the cheap stuff first, and it behaved just like I expected:  badly.  The felt stretched too much for the blade to cut properly and it got red fuzzies all over my mat.  I tried several different settings and both my regular and deep-cut blade housings but saw no improvement.

After a quick swipe with the lint roller (another indispensible tool when working with the Cricut), I loaded up the wool felt.  My expectations were not high, but to my surprise it cut like a dream!  I cut it with my regular blade housing at blade depth 6, pressure and speed at max.  I used my experiments to create this adorable pin for my little girl's skirt: 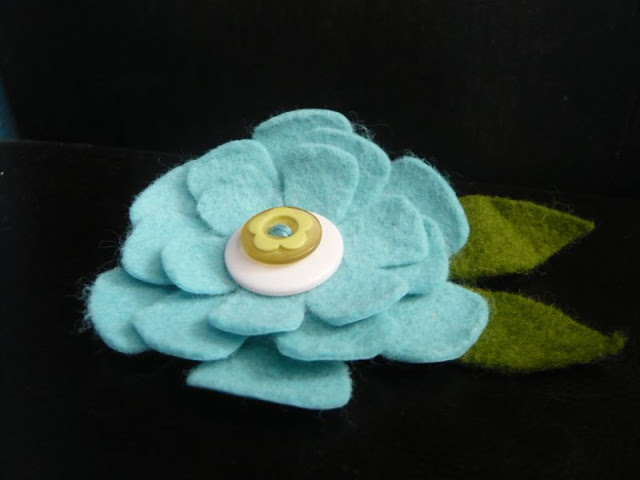 You do end up with iron-on adhesive on the back, so one side will be shiny, but I can't think of many applications where that would be a huge problem (and it may even be just what you need for your project!).  You do also need to check the blade frequently to remove any felt fluff that gets caught on it.

So I've got all sorts of plans a-brewin' for fun felt accessories.  I told my hubby that a whole new world had opened up to me!  Lucky for him, it's a world for which I already have all the supplies!

Other notes:  I used the flower from the Plantin Schoolbook cartridge at 2, 2 1/2, and 3" and hand cut the leaves.  The green button is from Stampin' Up, and I'm not sure where the pink button came from.  I attached a pin to the back and pinned it to my little girl's skirt.  I realized when I went to wash the skirt this morning that that was a BAD idea -- she pulled at it so much she put a pea-sized hole in the skirt.  So don't do the pin thing if you have a toddler who doesn't appreciate your attempts to make her so so pretty! :)
Posted by tomiannie at 2:23 PM 39 comments:

A birthday card with a surprise inside! 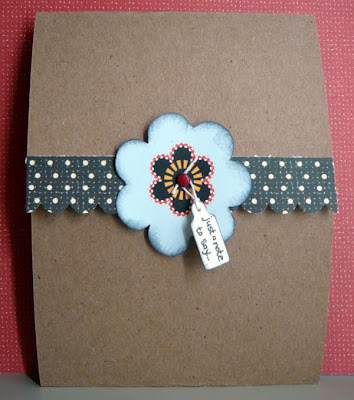 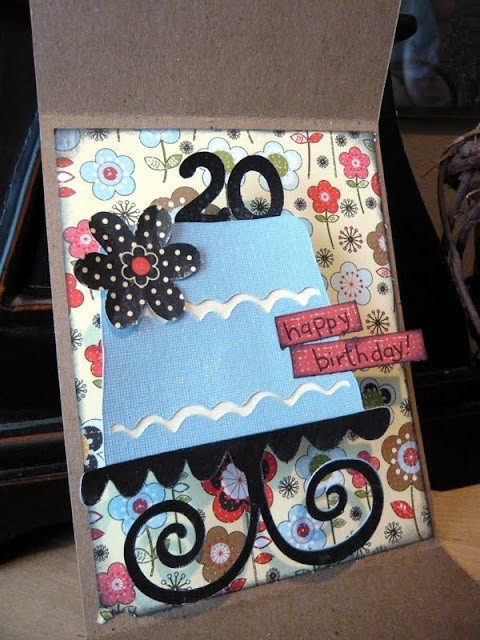 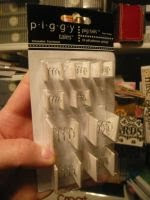 As soon as I found these cool pop-up spring mounts from Pig Tales, an idea for a sort of inside-out card started brewing in my brain.  What if I made the outside of the card quite plain and then the inside literally jumped out at you?!  My sweet SIL Crystal's birthday was the perfect opportunity to try it out, and I loved the result so much I was giddy.  Seriously, I was clapping my hands and bouncing up and down in my chair.  These spring mounts give so much movement and dimension they create a serious WOW factor.  The pictures hardly do the card justice because they can't capture all that, but I'll be doing a full video review of them soon, so keep an eye out for that!

Yay for a day to celebrate love!  We started today out, as many of you probably do, with a special yummy breakfast and Valentine's cards and goodies, so I thought I'd share ours!

This first one is my present for my hubby.  He's not a big fan of the froo-froo craziness that usually accompanies my creative endeavors, so I try hard to make things in a style he'll like.  I found the .svg file for this cute little takeout box at The Frugal Crafter, and it has little paper fortune cookies inside as well as a bunch of yummy chocolate candy.  I designed the graphics for the card myself.  The inside says "love you buckets and heaps and gobs," which is the kind of thing we frequently say to each other.  Oh, don't tell him I told you... 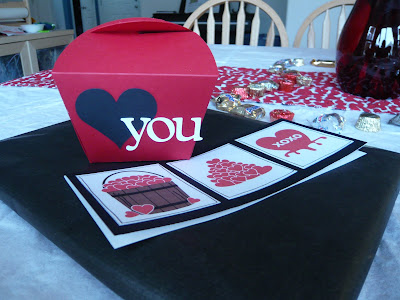 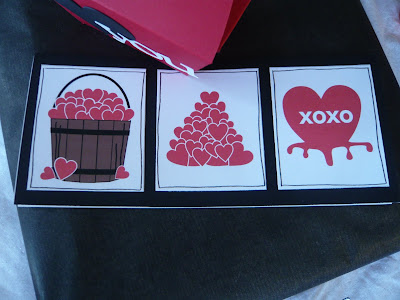 This is the one I made for my boys.  Last week we went to Disneyland, and they were SO excited for Space Mountain but found it, as Joshy put it, "tewifying!"  We all got a total kick out of these! 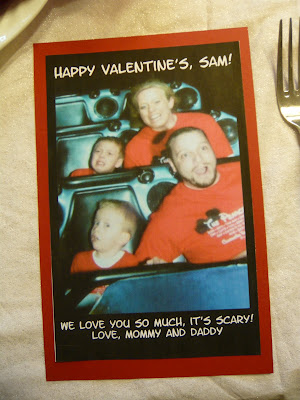 This was Sammy's valentine for school.  When I saw this idea over on UCreate, I knew it was a winner -- something easy and creative that Sammy would absolutely love. 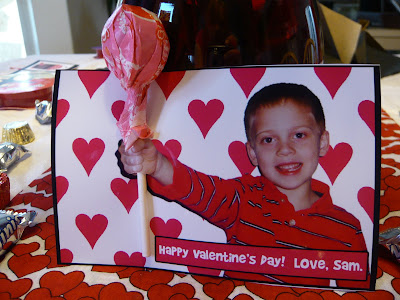 Dan even got into the creative spirit of things, turning his gift into a heart shape just for me.  I really appreciated that he wanted to make it special, and I REALLY appreciated the Pandora One membership -- now I can scrap to the music without those annoying timeouts or running out of time by the end of the month!  My hubby is so thoughtful -- this is something I wouldn't have thought to do for myself, but I will really enjoy it every day! He also arranged little candy bars in a heart around the vase of lovely roses in the center of the table.  So sweet! 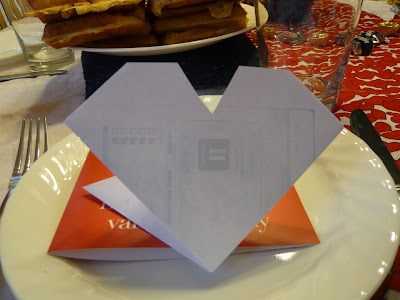 I hope Valentine's Day is a wonderful celebration of love for you, too!
Posted by tomiannie at 11:37 AM 3 comments:

Congrats! (No peeking, Andrey and Caitlyn!) 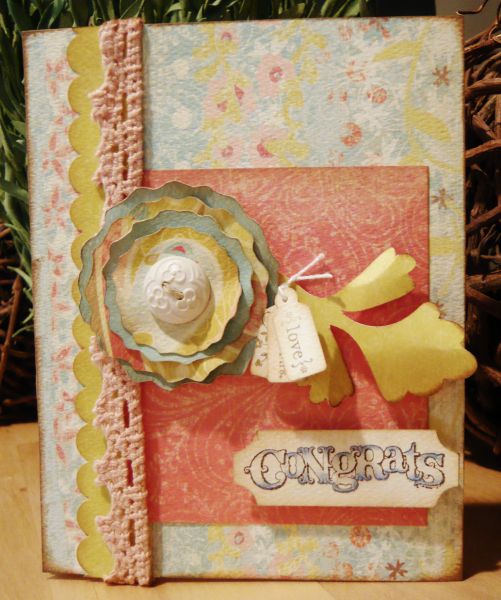 Usually I don't post cards before they've found their new home, but I used this week's sketch over at 2 Sketches 4 You and I couldn't resist posting it!  My little brother Andrey just got engaged last weekend to the lovely Caitlyn, who is very crafty and has a vintage style that I love, so of course I had to make them a very special card. 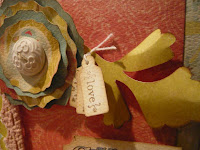 Caitlyn makes and sells lots of pretty fabric flowers in her etsy shop and in local boutiques, so I thought this frilly, funky flower I designed for SCAL would be perfect.  I learned recently that she loves vintage buttons (I may or may not be blog stalking her...), so I dug this sweet button for the center out of my vintage button stash that I recently discovered at the bottom of the sewing cabinet I inherited from my grandma.  The little tags are from a new Stampin' Up set I just got that I have been dying to use.  The top one says "love," the next one says "Mr. & Mrs.," and the bottom is a floral design.  Love it!  The paper and ribbon are from Crate Paper, the scallop punch and ticket-corner punch are from SU, and the Congrats stamp is from the Michael's $1 bin.  I used prismacolor pencil to color it -- not sure why it's showing up as such a different blue from the rest of the card, but it's really a nice turquoise that matches the background paper.  If you're interested, the cut file for the flower is available in my etsy shop.  TFL!
Posted by tomiannie at 4:21 PM 7 comments:

A bright and cheery Thank You!

For the past couple years, I've done Christmas-themed thank you cards for our family and friends who gave us Christmas gifts, but this year I was SO ready to jump into the new year and do something bright and fun.  I raided my cardstock stash for some bright colors and made a bunch of coordinating cards.  These cards make me happy, just like our wonderful family and friends! 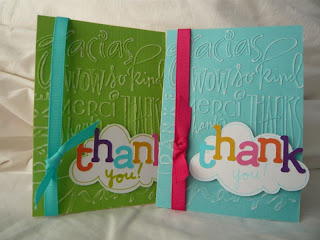