In December my parents celebrated their 35th anniversary, and my brother took some really fabulous pictures of them while he was visiting from England. This past Saturday was my dad's birthday, so I thought I would make a scrapbook page for him. (Several years ago I started a scrapbook for my dad. I do 8 1/2x11 pages, and gave him an 8 1/2x11 frame so he could frame the first layout. The idea was that every time I made him a new page he could put the new one in the frame and the previous one in the book. The only hitch is that he likes the first one I made him so much he's never taken it out of the frame!)

And my mom mentioned how much she liked the "10 Years of Us" layout I posted last month, so I thought I'd do a version of that, and I stole their wedding album last weekend to find a suitable picture.  Here's the result: 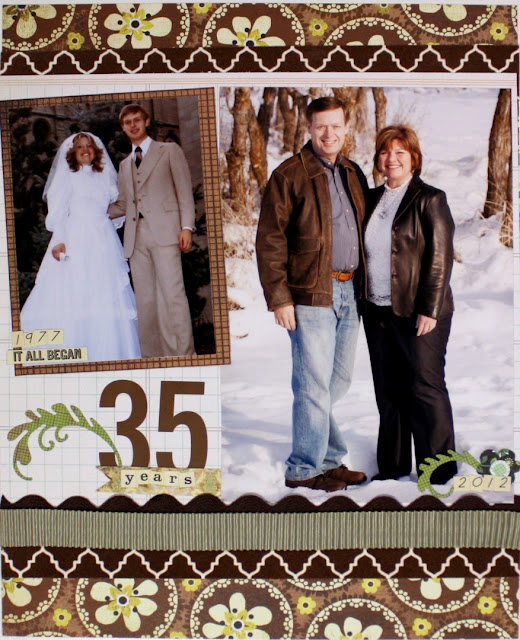 Aren't they beautiful and handsome?  My dad liked it so much he has decided to buy another frame so he can put this one up too, and not have to switch out that first layout. :)

Hmm, I don't think I've ever posted that one.  It's pretty darn cute -- I'll have to post it in the next couple days!

Posted by tomiannie at 2:03 PM