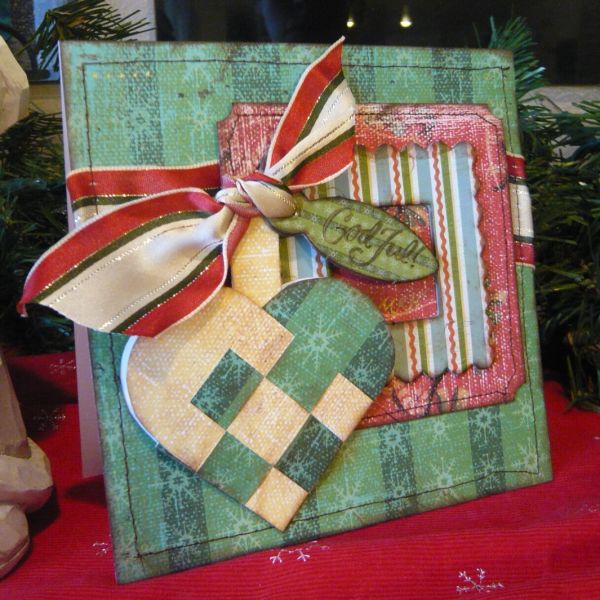 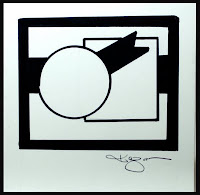 I wanted to create a special card for some dear friends in Denmark, and I thought I'd go again with the idea of a card with a removable ornament on the front.  I love the idea that even after they're finished enjoying the card, they have keepsake they can enjoy year after year.  The ornament here is called a julehjerte, which means Christmas heart in Danish.  It's about the most traditional ornament in Denmark and is supposed to have been invented by H. C. Andersen himself.  The tag says "God Jul," which means Merry Christmas!  I added a second chipboard frame to draw more attention to the tag with the sentiment.  The paper and chipboard are from Daisy D's and have been biding their time in my stash for a few years now.  I used this great sketch from 2 Sketches 4 You for the layout.  TFL!
Posted by tomiannie at 7:21 PM

What a gorgeous card - love the removable ornament idea! I have made those hearts before but never knew the origin - and never thought to make them for Christmas. I'll have to make some more this year as I'm always looking for fun new paper ornaments - TFS!

Just gorgeous!! what a fabulous take on the sketch!!

Very nice design! Thanks for making a card for 2S4Y this week!!

This is very pretty!! I really love the heart ornament that is attached! Great job with Kazan's Sketch 41!

they are going to love it just as much as we do
:)

This is gorgeous! And what a great idea with the ornament. I just realized how much I miss seeing your gorgeous work. I lost my blog links a few months ago. I'm putting yours back on my blog now. Hope you and your family are doing well. Merry Christmas!

Beautiful card! I love the heart... so pretty!

Congrats on making the Fab 5!

Love it Tomi Ann! I didn't realize when I was looking at it in person that it was a detachable ornament on the front.
I love all your designs and wonderful cards!

This is gorgeous and such a great take on the sketch. Love all the texture on this as well. Wishing you and your loved ones a blessed festive season.
Hugs
Desire